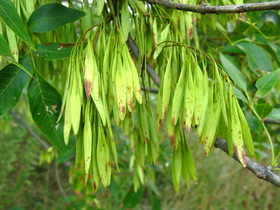 The Ash is the last of our native trees to flush in spring and is often the first to drop leaves following the first frost.

The Ash is a large deciduous tree which can live up to 200 years and is found across the UK, though not often north of the Great Glen.

The Ash has distinctive black buds when dormant and long clumps of pendulous seed casings, commonly known as 'keys', in summer.

A hard wood, the Ash timber is sought after for firewood. However, the branch unions are potentially weak and their large limbs can drop without warning.

In Sussex the Ash is known as the widow maker and is used for making cricket stumps, baseball bats and other items noted for their resilience.