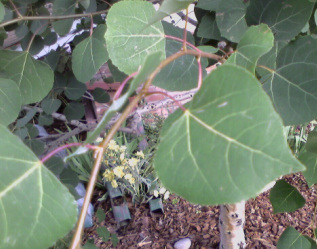 The 'trembling poplar' is so called because of the sound the rain makes as it drops through its loosely toothed leaves.

The Aspen is found across Europe, North Africa, Turkey and Siberia, though in Scotland it rarely seeds, but rather produces runners from its roots, much like a strawberry plant, and so tend to live in large colonies.

Aspens can be identified easily by the clear yellow or red colour of their leaves in the autumn.

A member of the willow family, Aspens have distinct male and female trees.

Due to its low flammability the Aspen is often used for making matches.