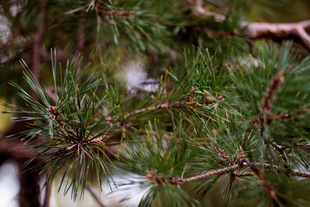 The Scots Pine is a large evergreen and Britain's only native pine. The trees can live between 150-300 years (though some specimens are much older),  and can grow to over 40m.

The bark of the mature Scots Pine is a thick, scaly, grey-brown on the lower trunk and a thin, flaky orange on the upper trunk.

Typically the mature Scots Pine has a bare, straight trunk topped by a mass of foliage. The cones mature over two years, and are red at pollination, turning to a light brown, then grey-green to yellow-brown at maturity. The black seeds are released between 22-24 months.