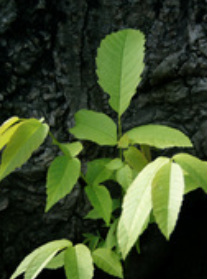 The Wych Elm, or Scots Elm, is common in the north and west of the UK and Ireland.

Though susceptible to Dutch elm disease, it is a less favoured host to the elm bark beetles that spread the disease.

The Wych Elm can be identified its broad, alternate leaves.

The tree flowers in March and produces thousands of round 'samara' fruits.

The Wych Elm derives its name from the Old English word wice meaning pliant or supple.